January 31, 2013
There are many devices that use infrared remote controls - TV's, DVD players, cameras, power sockets. So getting a Raspberry Pi to be able to send remote control signals opens up many possibilities for projects. Combining the GPIO pins with a web server on the Raspberry Pi means that we can create a web UI to control these devices. 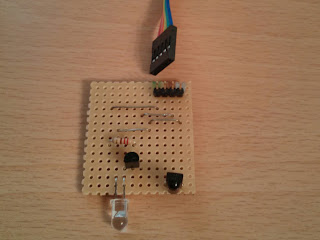 Installing LIRC on the Raspberry Pi

One of the great things about running a Linux operating system on the Raspberry Pi is that it provides access to a wealth of software projects that can run on the device. One of these is the Linux Infrared Remote Control (LIRC) project that provides a way of receiving and transmitting IR signals from many remote controls. LIRC provides a method of recording signals from a remote control and storing them in a configuration file, so that they can be sent directly from the Raspberry Pi.

Once LIRC is set up, we need to set up an infrared receiver and transmitter circuit.

The receiver circuit is the simplest to set up. I've used a TSOP382, but check the data sheet for your IR receiver as the pins for ground and Vcc are sometimes the other way round. If you connect those pins incorrectly you could fry the IR receiver. Also, note that I'm connecting the Vcc pin to 3.3V as the TSOP382 works fine on that voltage. 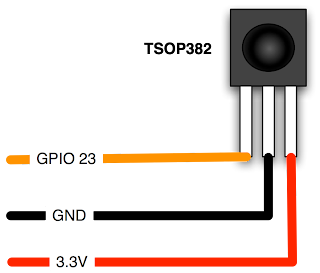 The Adafruit site has a great walkthrough of testing and using an IR receiver.

The IR transmitter circuit is a bit more complex as the current output from the Raspberry Pi GPIO pins will only give you a very weak signal from the IR transmitter LED. If you search on the Internet you'll find a number of different circuits that you can use to amplify the signal so that you can get a few meters distance of signal from your IR LED. 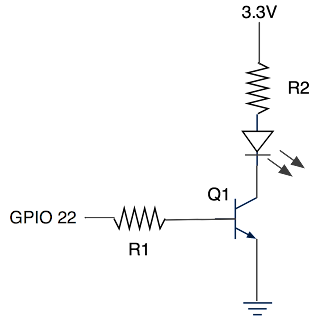 I'm sure sure what the IR LED I've used as I rescued it from a Sony DVD remote control. In terms of the components to use for the circuit, you'll find a number of options. I used the components that I had available (Q1=BC547 transistor, R1=220ohm, R2=omitted as I didn't have a low enough resistor). Though I haven't measured the range of the signal, it works fine from 4m away from the devices.

Once LIRC is setup and you can configured at least one remote, sending commands to through the IR LED is as simple as:

Of course, we don't want limit people to controlling the TV by ssh-ing into the Raspberry Pi to change the channel. So we need a web-based UI that people can access through a computer, tablet or smart phone. I got my 11-year old son to work on a design using Inkscape so that I'd have an SVG image that I could use as the web interface on an HTML5 web page. After a few iterations on the design, we came up with this: 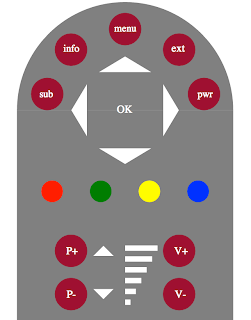 The advantage of using an SVG file is that it will scale naturally with the device that it is viewed one, so should work well on a smartphone's 4-inch screen as well as on a 20-inch monitor.

The web application has been written using the Flask micro-framework, similar to my previous post. This time, the application reads the LIRC config file (/etc/lirc/lircd.conf) and gets the names of the devices that have been configured, and presents them to the user. 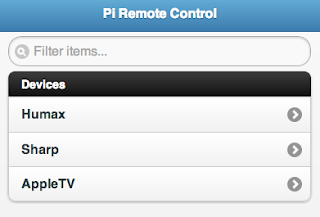 The web page uses JQuery Mobile to make it look good on smaller devices. Once the user selects the relevant device, the remote control is shown and the user can press a button on the touchscreen to operate the remote. Each button is configured to send a different operation e.g. pressing V+ will send KEY_VOLUMEUP. As we've seen previously, LIRC's irsend command only needs the device name and the operation command code to send the signal to the LED. With Flask, this can be done in less than 50 lines of code:

The only complexity that we come across of parsing the LIRC config file to get the names of the devices. Unfortunately, they have not used a standard format like YAML for their config file, so the parser may run into problems if you add comments on the same line as your commands. However, sending the command to LIRC is straightforward using a shell command to irsend:

The full code is available on GitHub: https://github.com/slimjim777/web-irsend.

Popular posts from this blog

February 24, 2013
There is an update to this post that shows a simpler and more maintainable approach to the installation . Installing Ubuntu on a Mac tends to be a little trickier than installing on a PC as Macs use EFI instead of BIOS. Now, with the introduction of Apple's Retina Macbook Pro screens we have an additional complication. However, Canonical and the Ubuntu community have been investing some time in getting the Retina Macbooks to play nice with Ubuntu 13.04, so I decided to get the latest, bleeding edge version. The great thing is that there has been an effort to keep the trunk version stable, so I've that getting the pre-release version of Ubuntu 13.04 to be a great solution. If you search the Internet for information about running Ubuntu on the Retina Macbook Pro, you'll find tales of issues with the screen resolution (running at 2880x1880 with tiny icons and text), and driver issues with WiFi and sound. Well, I'm pleased to say, that Ubuntu 13.04 (with the 3.8.0-6
123 comments
Read more

Installing Ubuntu on a Retina Macbook Pro - the easy way

January 19, 2014
Update : If you have Mac OS X 10.10 (Yosemite) installed, then the rEFInd installation needs to be handled differently. Please check the rEFInd website for more details. In my previous installation guide , I outlined the first way that I found of installing Ubuntu on a Retina Macbook Pro. One of the challenges of the installation was that the boot manager, rEFInd, needed the Linux kernel to be copied from the Linux partition to the Mac OS X partition. This then becomes a painful process that needs to be repeated every time there is a kernel update on Ubuntu. Fortunately, there is a better way! Thanks to a comment on the rEFInd website, I found out that file system drivers can be installed that allow rEFInd to read the Linux partition. This post outlines the full installation instructions, but if you already followed the previous guide, you can update the rEFInd installation and configuration file. I've included some instructions on that in the post. 1. Partition the Hard
19 comments
Read more